On 7 June 2021 Lodge St Servanus presented a cheque for £700 to the Alva Development Trust Foodbank.

The cheque presentation was made by our RWM Bro. Russell McKendrick accompanied by WSW Bro. George Paterson and WJW Bro. Kevin McCallum.

The foodbank operate along the hillfoots from Menstrie through to Milnathort providing food parcels to those in need. 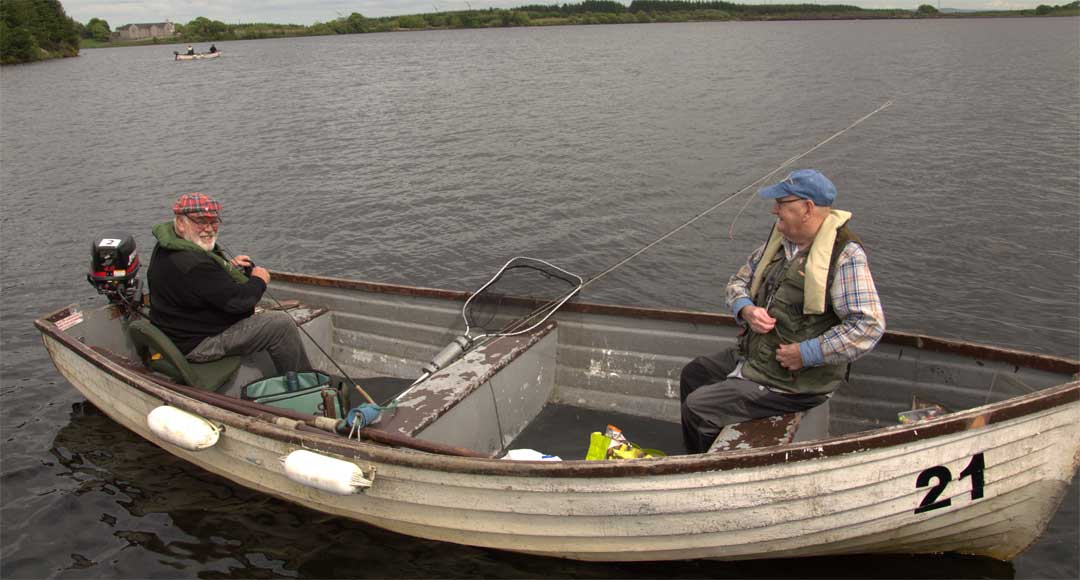 By all accounts Russell and Willie had a great day, catching a bag of prawn crackers apiece! 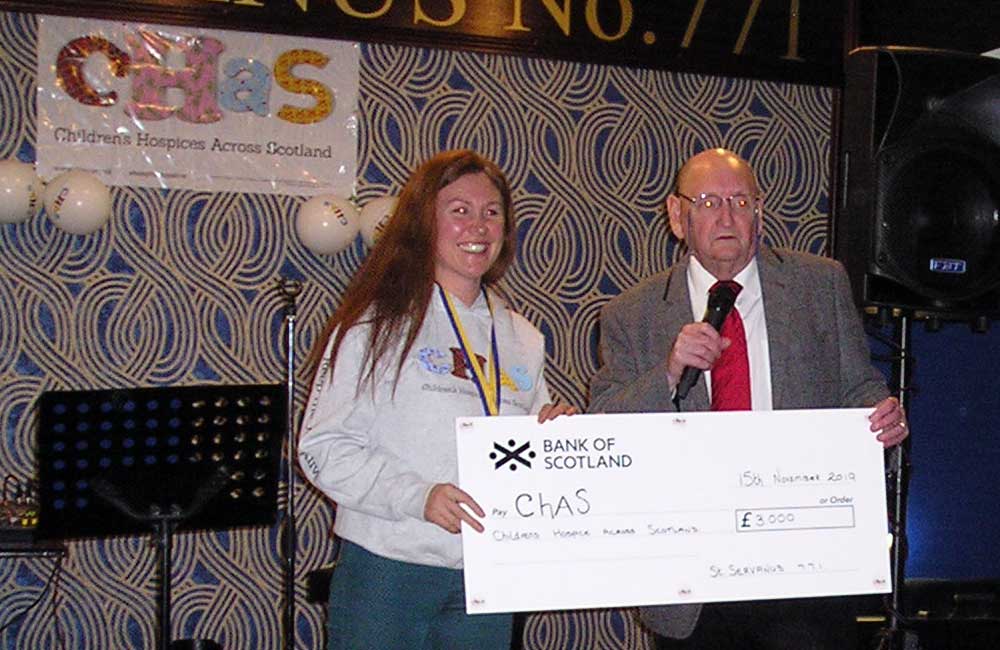 On Friday 15th November 2019 the RWM of Lodge St Servanus Bro. Russell McKendrick presented a cheque for £3,000 to CHAS (The Childrens Hospice Association Scotland) and a cheque for £837 to FVRH CHildrens Ward.

This was the proceeds of a very successful bingo tea and sponsored walk by brethren, families and friends.

I would like to thank all who took part in our sponsored walk.

The format was a family fun day, with drinks, sweets , hot dogs and a medal for all the kids who walked.

As a result of this The Childrens Hospice Association SCotland will be £3,000 better off and Forth Valley Royal Hospital Childrens Ward will be £837 better off.

Many thanks to all our volunteers, walkers and sponsors. 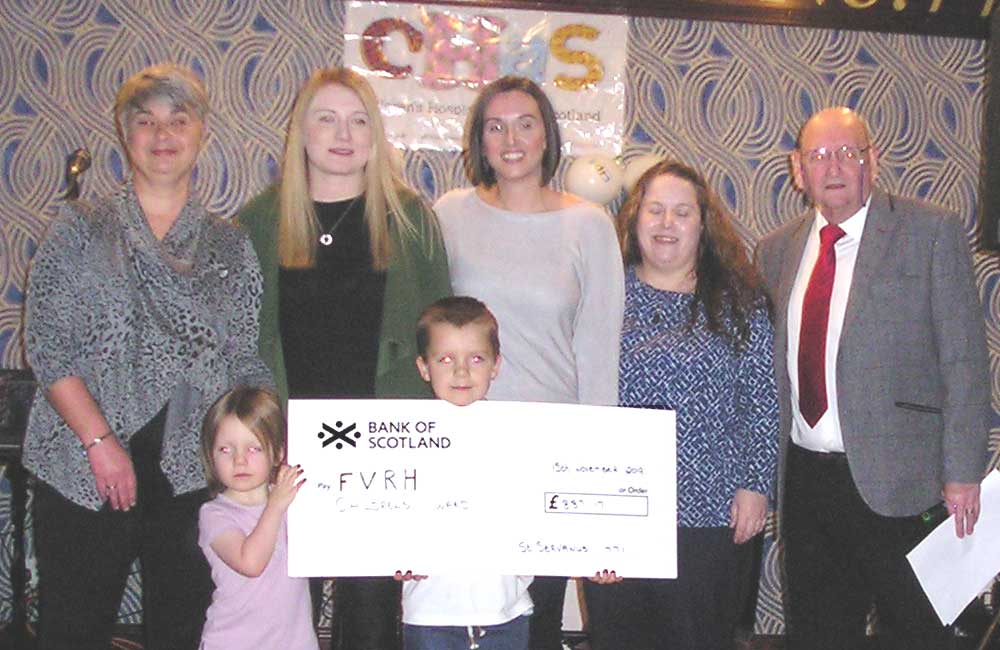 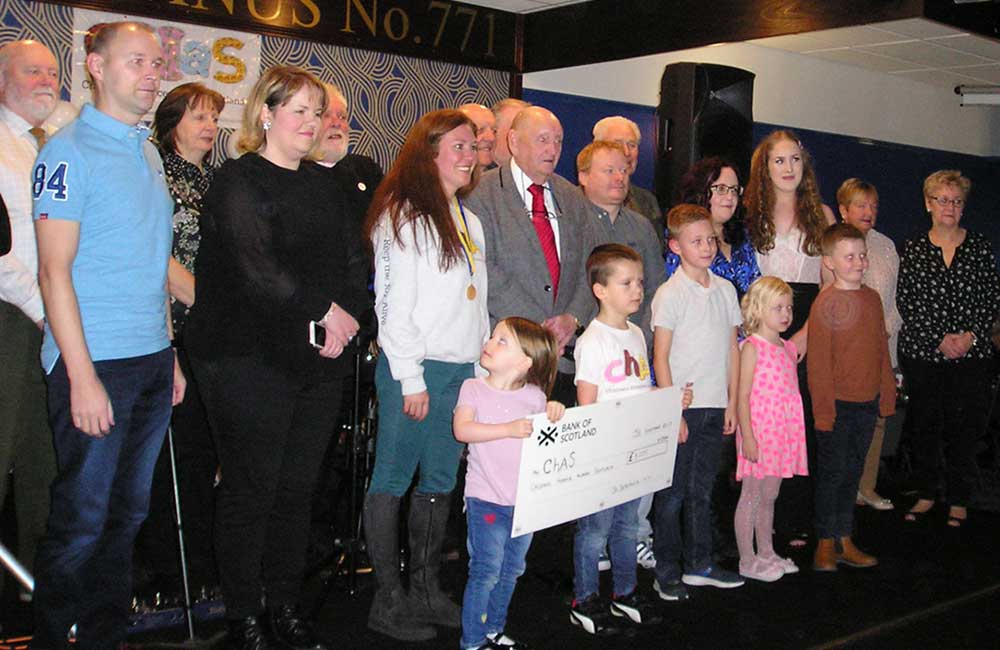 An excellent evening was had at our Annual Past Masters Dinner on Friday 20 September.

Our thanks go to Escoffier catering who provided a wonderful meal and to the fantastic “ MOJO RISING” for their first class entertainment.

There were 59 Past Masters in attendance with the PMs quiz won by Kevin McCallum and his team who had the privilege of holding trophy till the end of evening along with the bragging rights. See below for photos. 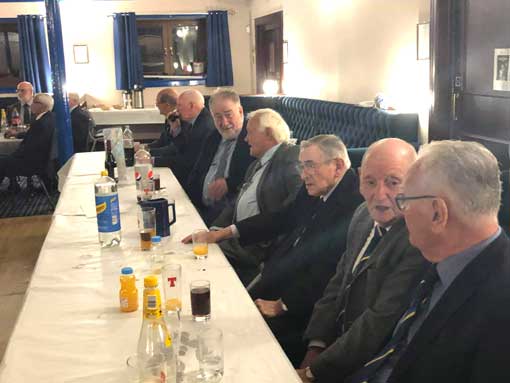 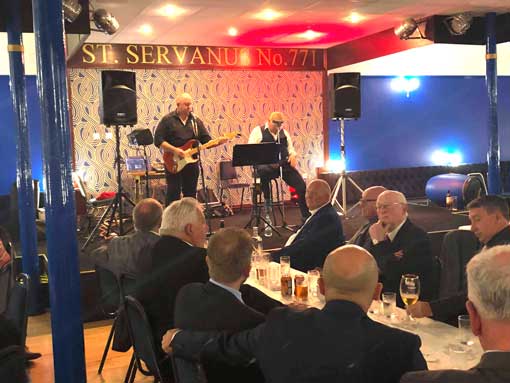 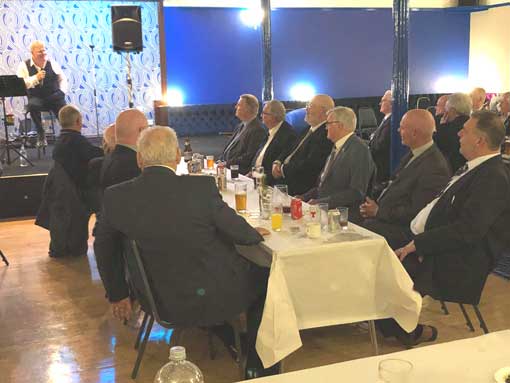 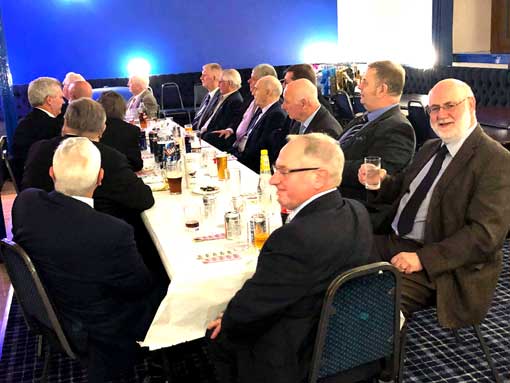 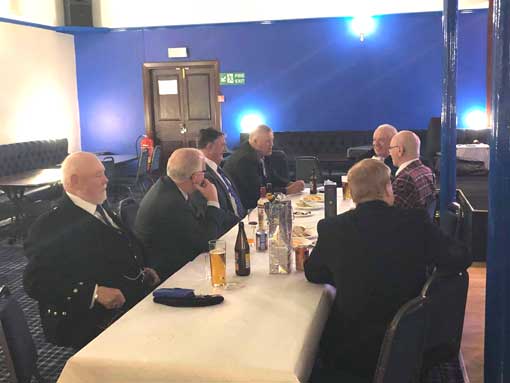 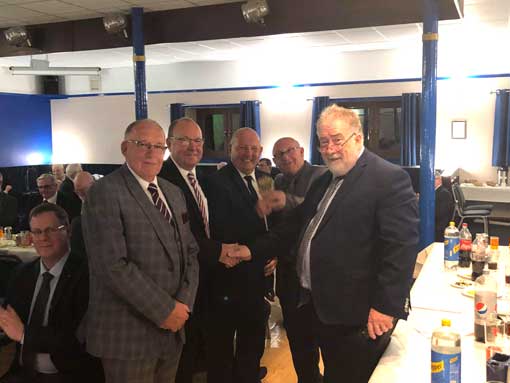 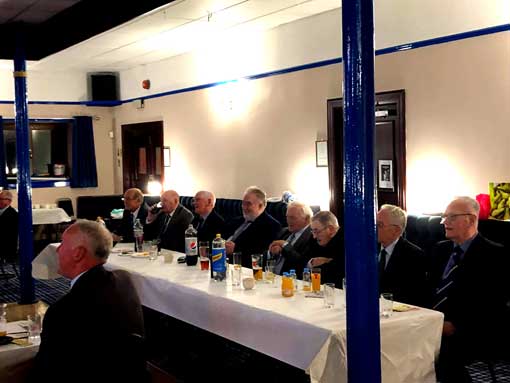 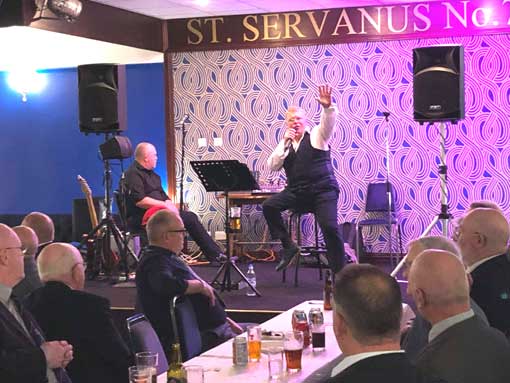 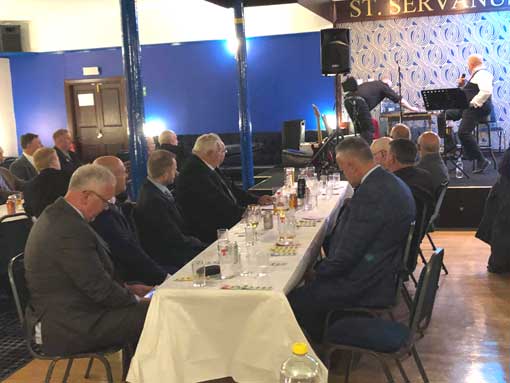 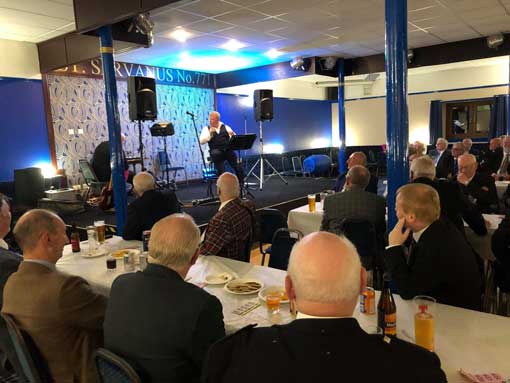 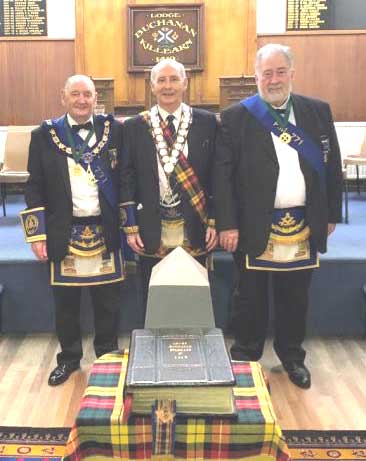 At the regular meeting of Lodge Buchanan Killearn No. 1419 on 21 March 2019 two distinguished Past Masters of St Servanus were awarded honorary membership of the Lodge.

Bros. R. Russell McKendrick and Thomas Adams are pictured above with the Right Worshipful Master of Lodge Buchanan Killearn. Congratulatiomns go to both brethren. 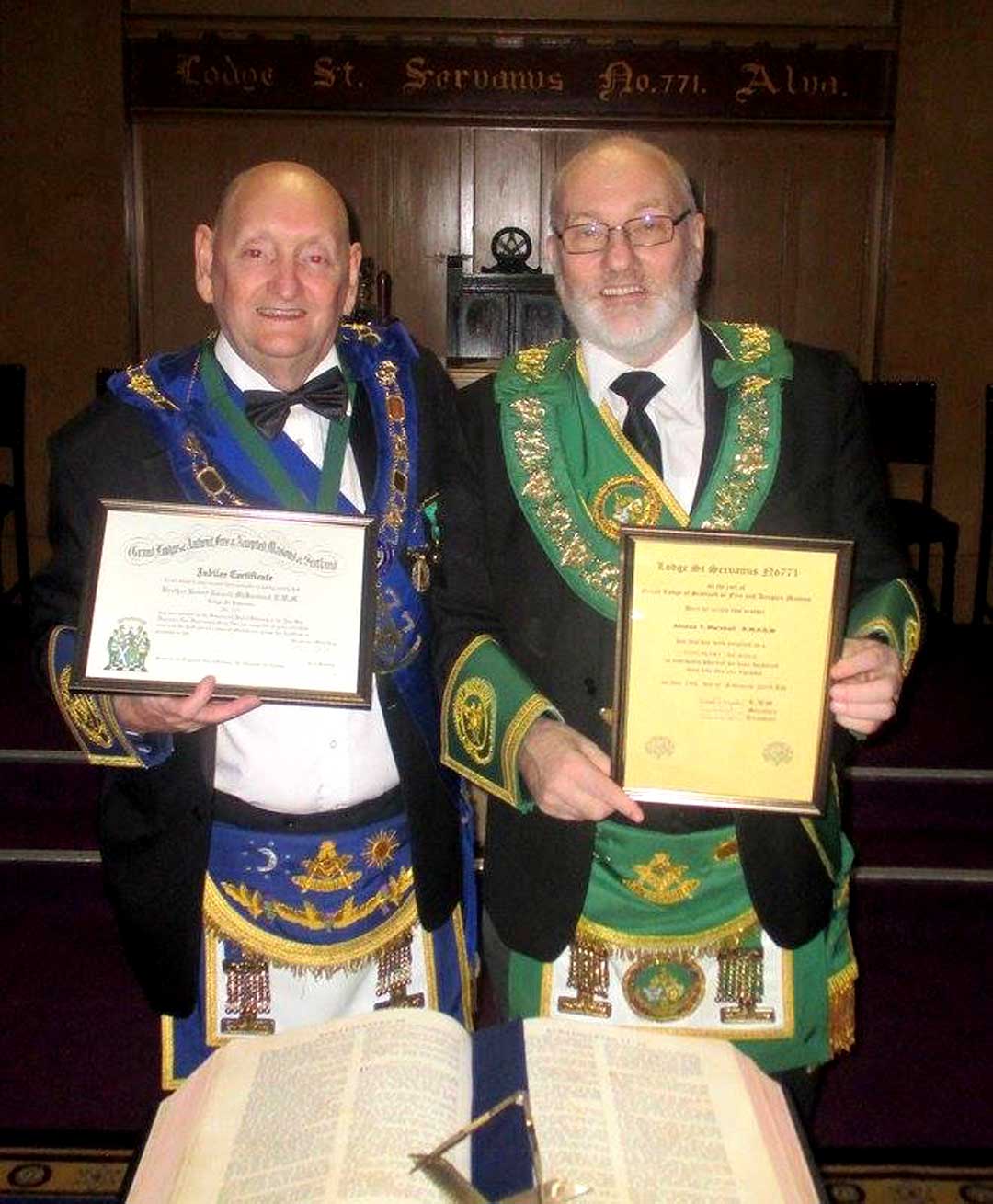 To commemorate his fifty years as a mason our RWM Bro. R. Russell McKendrick was presented with a fifty year diploma at the Regular meeting held on Monday 11 February 2019.

During the same meeting Honorary Membership of Lodge St Servanus was awarded to our RWPGM Bro. Alistair T. Marshall – congratulations to both. 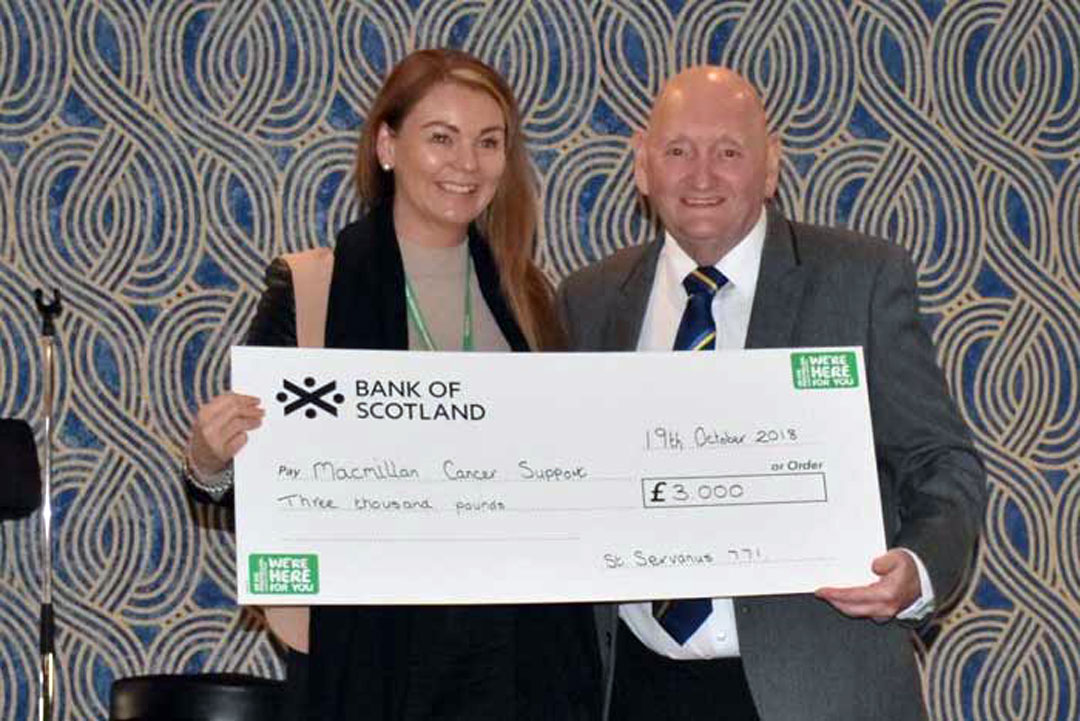 This was the proceeds of a very successful bingo tea and sponsored walk by brethren, families and friends.

I would like to thank all who took part in our sponsored walk.

The format was a family fun day, with drinks, sweets , hot dogs and a medal for all the kids who walked.

As a result of this MacMillan Nurses will be £3,000 better off.

Many thanks to all our volunteers, walkers and sponsors. 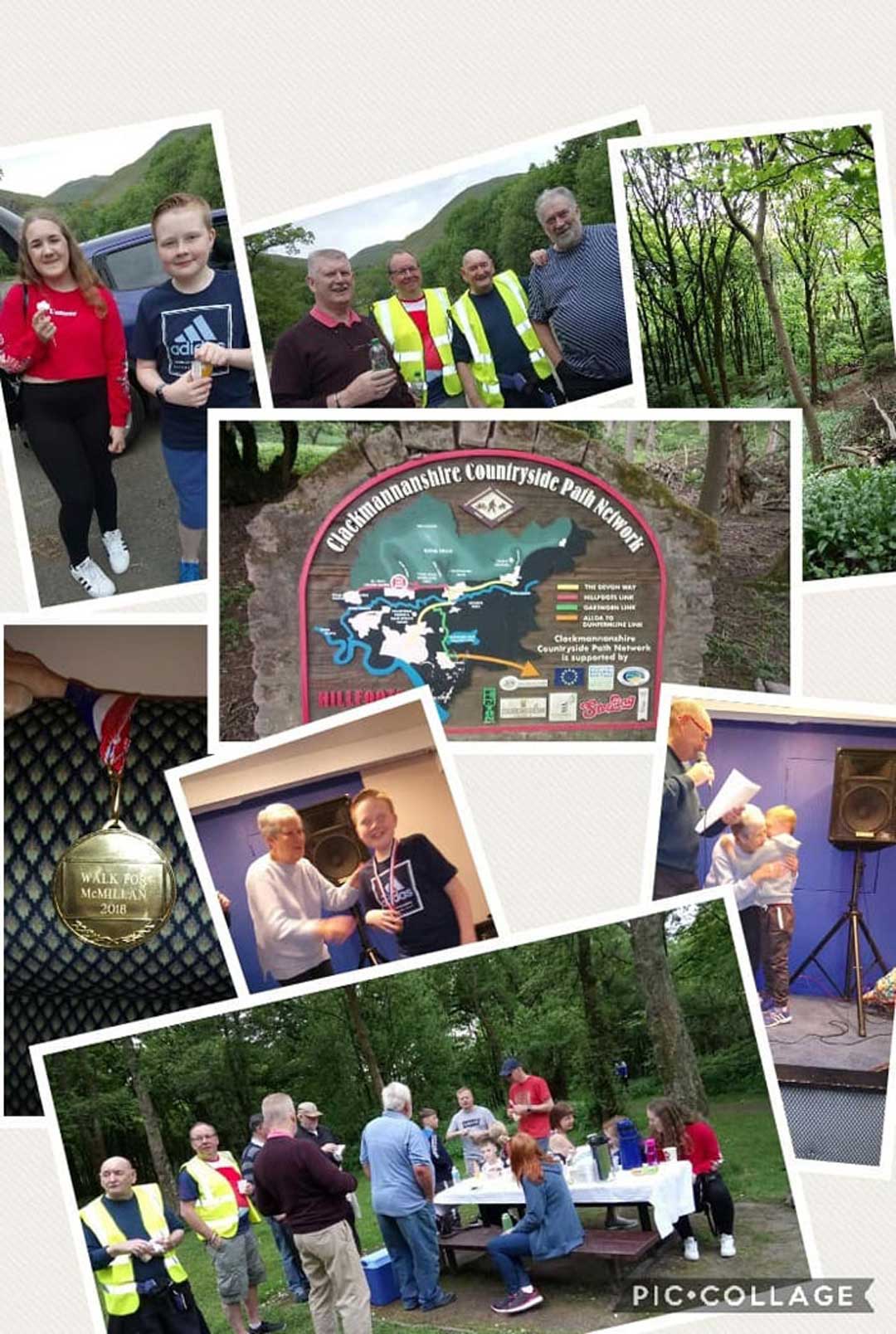 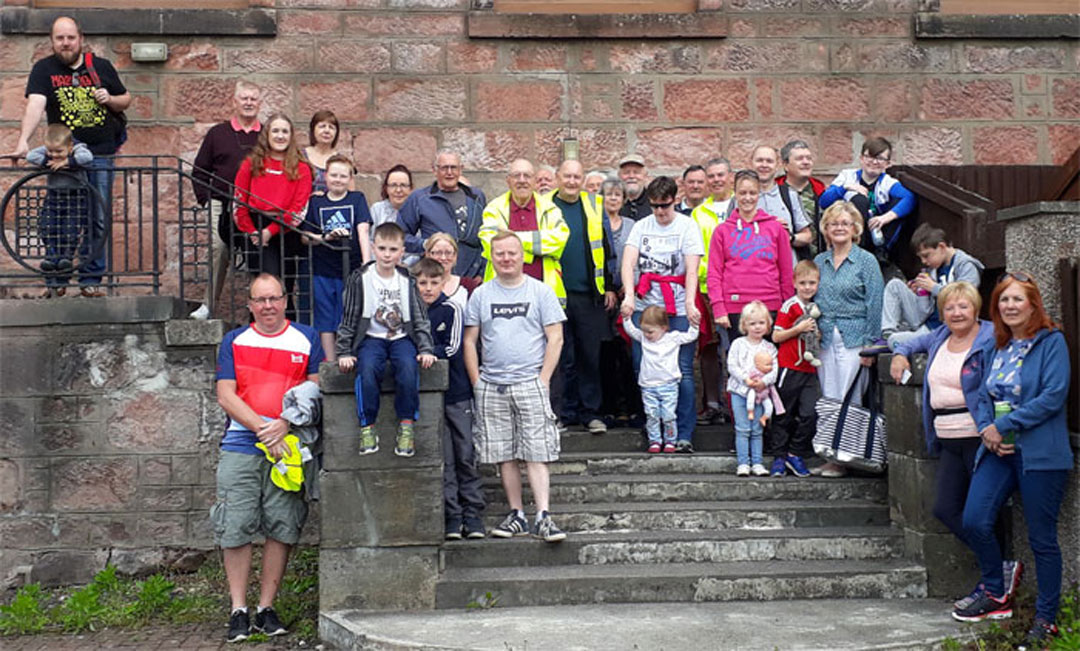 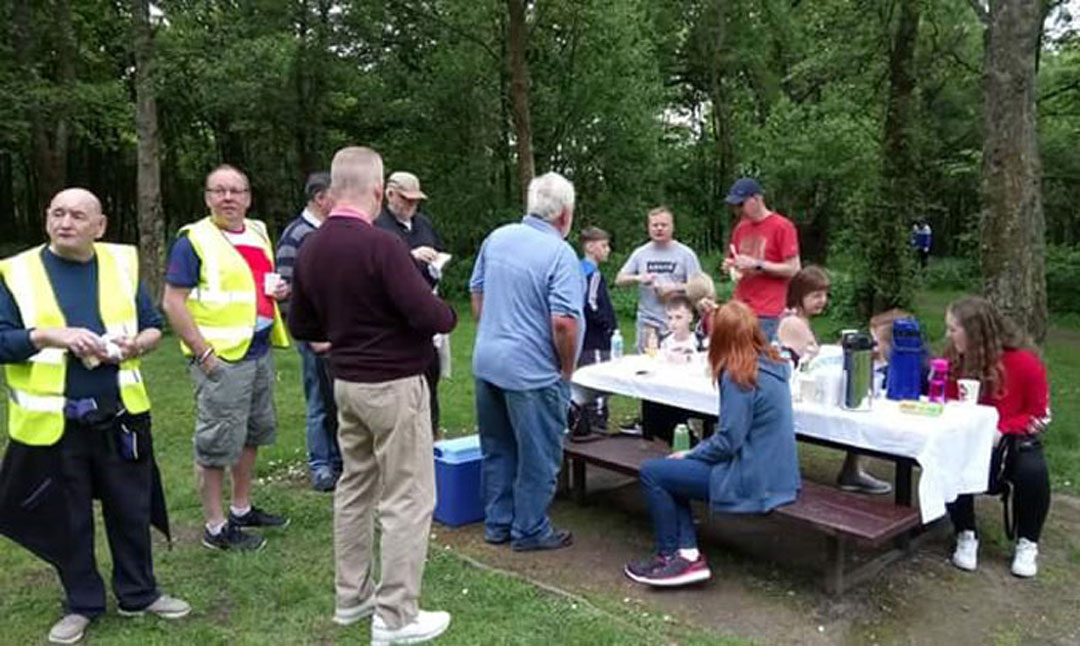 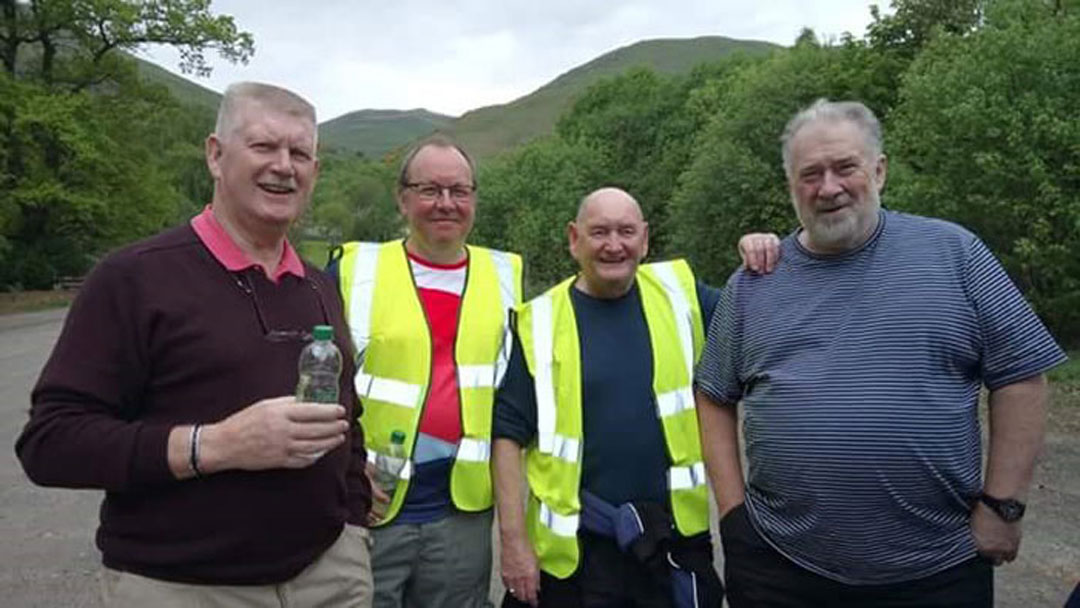 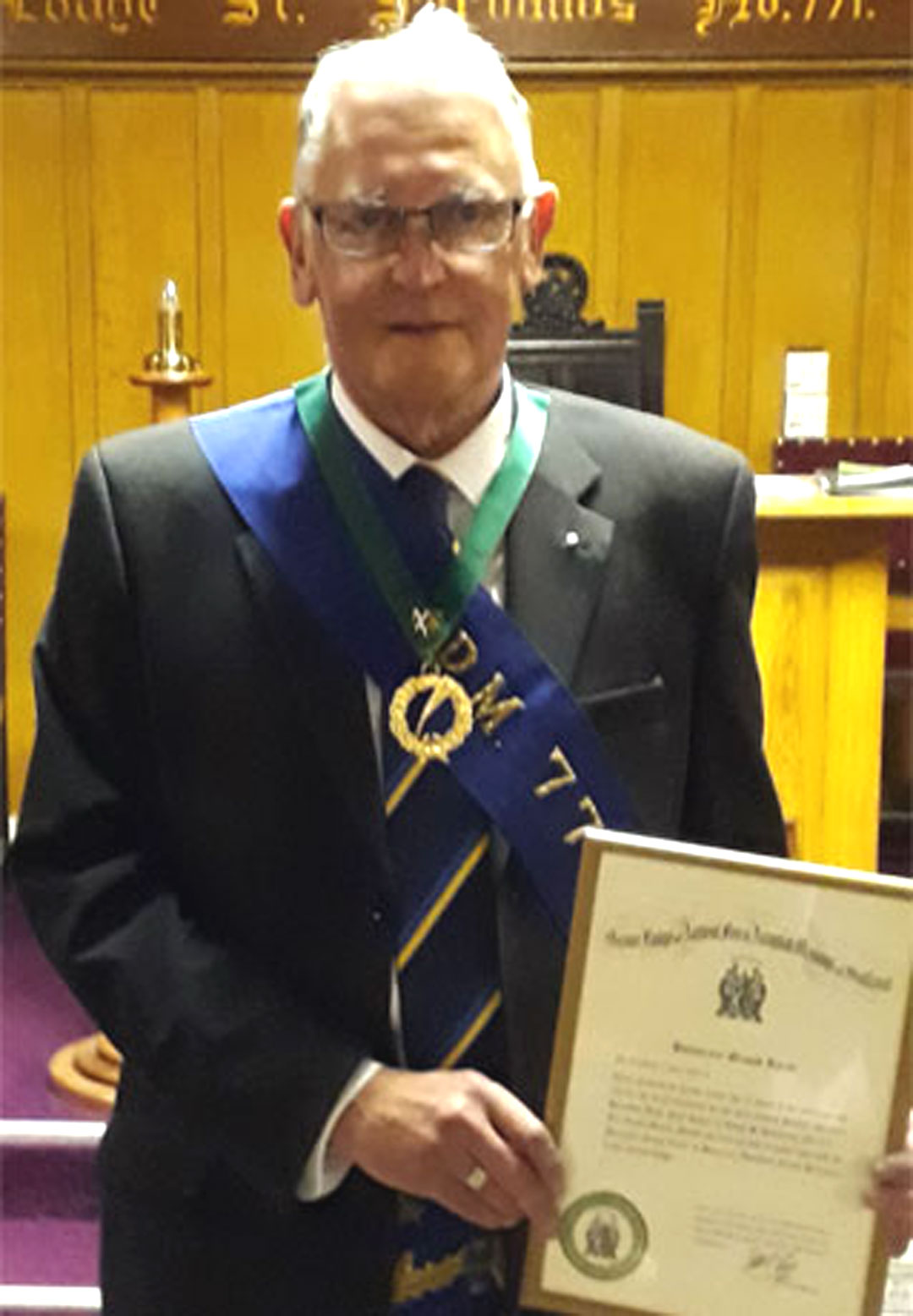 It is with great pleasure that the lodge takes this opportunity to congratulate Bro. Douglas H. Buck P.M. on his being appointed to the rank of Honorary Assistant Grand Secretary by the Grand Master Mason on the occasion of the Annual Installation of Grand Lodge on 30 November 2017.

In the history of Lodge St Servanus (127 years at the time of writing) this is only the second occasion that Honorary Grand Rank has been bestowed on a member, the previous recipient being Bro. Robert D. Wilson P.M., who was awarded the rank of Honorary Grand Sword-bearer in 1982.

Bro. Dougie was entered, passed, raised and advanced in Lodge St Servanus in 1972.

His enthusiasm was such that he was installed as an Office-bearer at the first opportunity and was elected to the office of Right Worshipful Master in 1979, his installing Masters’ being Bros. Robert Beveridge, Colin T. Wyse and Alfred S.F. McGhie.

Apart from a few short breaks Bro. Dougie has, since 1982, served as Lodge Secretary.

Additionally, with the exception of a six year break in the 1990’s, he has also organised the Annual Burns Supper.

This six year break was a result of Bro. Dougie moving through to Ayrshire due to work commitments and whilst there he affiliated to Lodge St David (Tarbolton) Mauchline No. 133, the mother lodge of Bro. Robert Burns, where he served as Director of Ceremonies.

On his return to Alva in 1998 Bro. Dougie picked up where he had left off as though he had never been away.

In recognition of his services during his tenure in Mauchline the members of Lodge St David (Tarbolton) Mauchline awarded Bro. Dougie with Honorary Membership of the Lodge.

And so it has come to pass that a Burn’s enthusiast and proud Scotsman holds two honorary ranks, the former from the mother lodge of Bro. Robert Burn’s himself and the latter from the Grand Lodge of Scotland awarded on St Andrews day!

Congratulations Dougie from all your friends and colleagues. 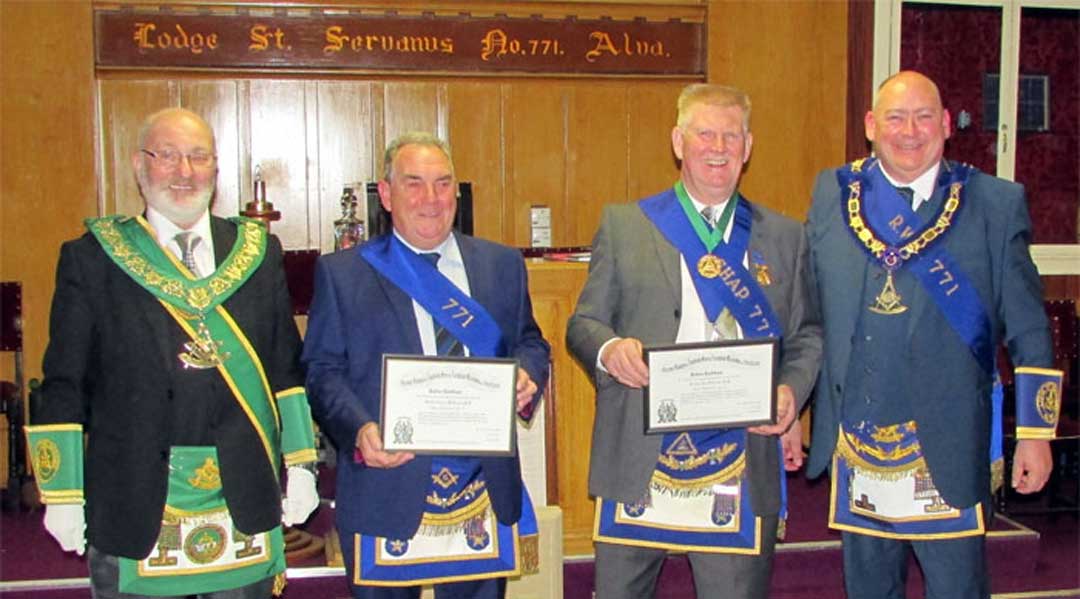 The R.W.M. gave the assembled brethren a short resumé of their masonic careers from initiation through to the present day and thereafter, accompanied by the R.W.P.G.M., presented both brethren with their Diplomas.

In response Bros. Ian and Jim thanked all of the brethren in attendance and their colleagues, past and present, with whom they had worked throughout their masonic careers.